Wizkid has shared an father and son video with his 3rd son Zion, 24 hours after his 3rd baby mama and mangaer, Jada Pollock accused him of always beating her.

Recall, Wizkid third babymama, Jada P called out the singer and accused him of Domestic Violence in their relationship.

Jada has been defending Wizkid for many years from allegations from his other baby mamas, but she had declared that she is tired of defending him.

In a post she shared on her Instagram story, Jada says Wizkid beats her a lot, and sometimes leaves her with bruises on her body.

“From today I and Ayo no longer work together. I’ve been in an abusive relationship with him for years, covering up for him time and time again. I am tired.”
“Wiz continuously puts his hands on me, leaves me with bruises that I cover up from he world including my friends and family. It often feels like we are at war in the same house”
“I have done all I can to keep this all together but from today I let go. You can support someone as much as you can but at some point you have to value yourself.”
“I can’t raise my son in this kind of unhealthy environment”. she wrote on the gram.

Wizkid who turned 29 yesterday, is yet to respond.

I really hope this domestic violence thing with wizkid and jada isn’t true. This can ruin his career no matter how big he is

Wizkid continuously beats me, leaves me with bruises — 3rd baby mama, Jada dumps him over domestic…

Wizkid third babymama, Jada P has called out the singer and accused him of Domestic Violence in their relationship. Jada has been defending Wizkid for many years from allegations from

46 people are talking about this

‘Karma is a bitch’. One of Wizkid’s baby mamas Binta Diallo has mocked another, Jada P.

This is coming on the heels of the latter accusing the singer of domestic violence.

36 people are talking about this

Jada said you people’s Wizkid is a woman beater 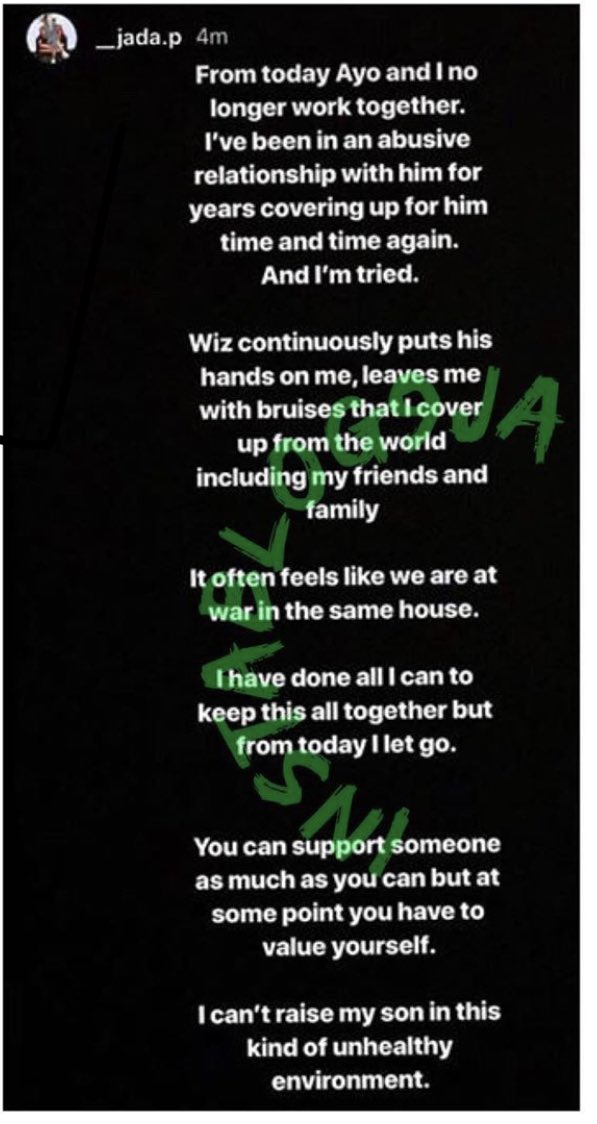 83 people are talking about this

Jada said what? I can’t believe my eyes!

My favorite boy is about to loose a fan like me ooo….why will he beat jada

It’s really hypocritical of you lot to keep “hoping what Jada said isn’t true” coz your fave is involved. Any other guy you would have pounced on but since it’s wizkid, you’re hoping & praying. From treating his kids & baby mamas with disdain to beating his partner. Trash!

See I am Iron Man’s other Tweets

Wizkid has just been accused by his 3rd baby Mama Jada P of battering, i know y’all Wizkid FC will keep mute about this, every other baby Mama he has have always spoken ill about him, well what i think is wizkid should learn to do about better when it comes to handling women.

Jada you better japa before that igbo smoker will kill you. Because when people hear of it they will say no oo. Wizkid Na legend. He can’t do such.

Jada said what? I can’t believe my eyes!

See stephanie’s other Tweets
Wizkid shared the video on his Instagram story.

Watch the video below: